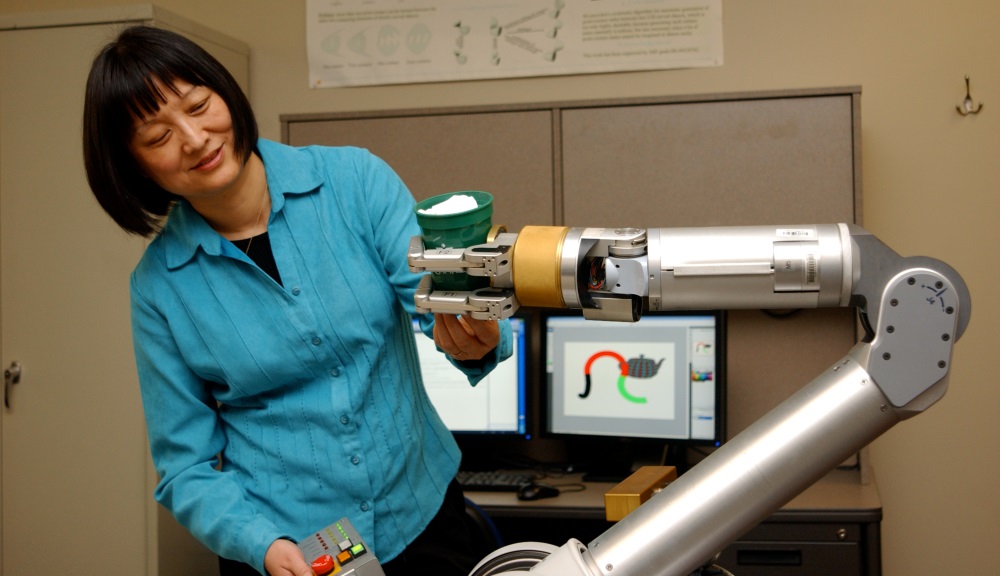 Jing Xiao, a leader in robotics research and education, will join Worcester Polytechnic Institute (WPI) in January as director of the university’s pioneering Robotics Engineering Program.

“Jing Xiao is one of the nation’s leading roboticist,” said Bogdan Vernescu, vice provost for research at WPI. “I have confidence that she will not only continue the excellent work that we have been doing for the past decade, but take it to the next level.”

Winston Soboyejo, Bernard M. Gordon Dean of Engineering at WPI, said Xiao is an excellent fit because of her combination of skills in research and mentoring, and her solid credentials as a program builder. “Under Xiao’s leadership, we look forward to the continued growth of our robotics program, to having an increased impact through our research, and to collaborating more with industry.”

Having served as the program director for the National Science Foundation’s Robotics and Human Augmentation Program between 1998 and 2000, Xiao is currently the UNC Charlotte site director for the Center on Robots and Sensors for the Human Well-being, the only National Science Foundation–funded Industry/University Cooperative Research Center (I/UCRC) focused on robotics technologies.

Xiao has been conducting critical research in haptics, the science of enabling machines to feel or communicate through touch. She’s also working on real-time adaptive motion planning, which enables robots to plan their own path as they move through a changing and often busy environment.

She will be the second director of WPI’s robotics program, which was launched in 2007 and was the nation’s first undergraduate degree program in robotics engineering. The university was also the first in the nation to award bachelor’s, master’s, and doctoral degrees in the discipline. The interdisciplinary program, which includes faculty members from the departments of Computer Science, Electrical and Computer Engineering, and Mechanical Engineering, offers more than 20 courses and operates 11 laboratories. It was recognized in 2016 with the ABET Innovation Award from the Accreditation Board for Engineering and Technology.

Xiao said she is eager to join a program that has such a rare, and strong, undergraduate foundation that combines seamlessly with graduate degree programs. “My task is to try to make the program better and stronger and recognized worldwide,” she said.

Toward that end, Xiao said she expects to begin hiring more faculty for the program. “People are the most important component for a good program,” she added. “WPI’s history and reputation in robotics positions us to recruit additional leading roboticists and strengthen our program.”

With master’s and PhD degrees from the University of Michigan, Xiao said she is looking to expand WPI’s work with industry, increasingly exposing student and faculty researchers to interesting new projects and real-world problems, an outgrowth of her previous work.

In the not-so-distant future, she said, students will be joining industries where people don’t just build robots, but where they will be expected to work alongside them. People will need skills to program their robotic co-workers, supervise teams of robots, and work jointly with them. “This is an opportunity for our robotics program,” said Xiao.

In advance of Xiao’s arrival in January, the Robotics Engineering program is continuing to consolidate and grow the footprint it occupies at 85 Prescott Street, where it currently maintains labs and administrative space. “A common space will greatly facilitate interdisciplinary teams working together to innovate and create synergy,” Xiao said. “In addition, robotics is a great magnet for potential students, so we’d like to have a better showcase to engage prospective students and their parents.”