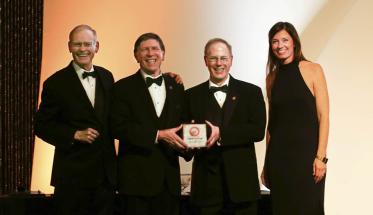 Trailblazing has long been a part of the DNA of the WPI Robotics Engineering program.

In 2007, WPI became the first university in the nation to offer a bachelor’s degree in Robotics Engineering. It launched a master’s program in 2009 and a PhD program in 2011. In doing so, WPI became the first university to provide bachelor’s, master’s, and PhD programs simultaneously, and is still one of only a handful of institutions to offer both graduate and undergraduate programs.

In 2013, FIRST (For Inspiration and Recognition of Science and Technology) announced that it had selected WPI to support the new FIRST control system by developing software to be used by FIRST Robotics Competition (FRC) teams starting in 2015.

As a result of its pioneering academic and technical acumen—and its ability to create a robust pipeline of future robotics talent—WPI has earned another first. 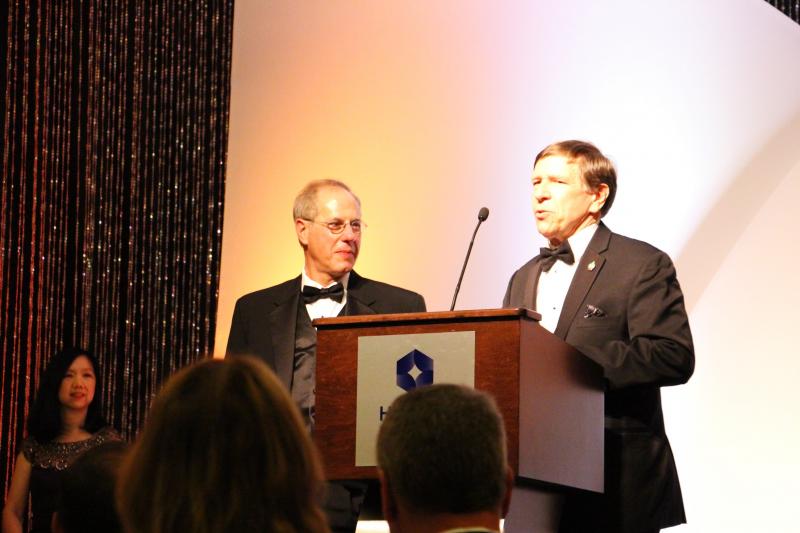 “We are thrilled to receive this prestigious honor from ABET,” said Michael Gennert, director of WPI’s Robotics Engineering program, who accepted the award along with David Cyganski, former acting dean of Engineering and current professor of electrical and computer engineering, following the ceremony near ABET headquarters in Baltimore. “This award is shared by all of the faculty, students, and staff who have made such a tremendous impact on our program over the years.”

“When we decided to create our Innovation Award earlier this year, we wanted to recognize programs bringing a new dimension to education. WPI’s Robotics Engineering had that, and more,” said Milligan. “We found leadership that showed incredible vision to create a program where nothing existed before. We found faculty committed to bringing a holistic approach to technical education, integrating computer science, electrical, computer engineering, mechanical, and systems engineering to create the first undergraduate robotics engineering program in the U.S.”

At the same time, Milligan said, the awards committee “…also found students being prepared to enter a new and rapidly growing field with the technical, entrepreneurial, and ethical skills to make the world better, safer, and more sustainable. For all these reasons, we could have not found a better program to receive our inaugural Innovation Award, and we’re extremely proud to honor WPI with this prestigious recognition.”

A combined 400 bachelor’s, master’s, and PhD graduate degrees have been awarded in Robotics Engineering at WPI since the program began. There are currently 366 undergraduates and 167 graduate students enrolled in the program.

Because no single discipline sufficiently provides the scope and range of knowledge that is being increasingly demanded of robotics engineers, WPI employs an interdisciplinary approach with Computer Science, Mechanical Engineering, and Electrical and Computer Engineering departments. The engineering components teach students how to build the body of a robot, while computer science focuses on how to control its behavior.

“The program broke new ground by creating a major to meet the need for robotics professionals before that need had become clear to many,” said Gennert.

Gennert noted that there are a number of emerging areas in robotics, including logistics robots, self-driving cars, and autonomous unmanned vehicles. “We continue to see more robots in collaborative manufacturing, medical and rehabilitation applications, and defense,” he added.

As part of WPI’s overall mission to improve science, technology, engineering, and math (STEM) education at all grade levels, the Robotics Engineering program has played a leading role in exposing K-12 students to robotics, inspiring enthusiasm in STEM learning, and providing hands-on opportunities for students to apply what they learn.

WPI faculty and students have played a leadership role in the development and expansion of FIRST Robotics Competitions, a nationwide program of robotics competitions involving thousands of middle and high school students in hundreds of competitions every year. Through the university’s Robotics Resource Center, WPI has been working to develop interactive communications tools to help FIRST teams improve their performance by accessing and sharing new information and ideas.