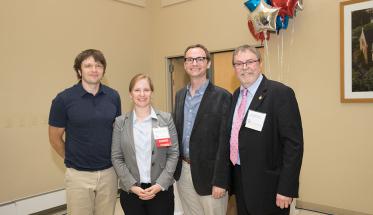 Last week, current students, alumni, faculty, parents, and friends of the Massachusetts Academy of Mathematics & Science at WPI celebrated its 25th anniversary with a daylong series of events highlighting the school’s invaluable impact in the lives of students from all over Massachusetts.

Founded in 1992, Mass Academy is a public high school for academically advanced 11th and 12th grade students. The only one of its kind in Massachusetts, the school enrolls juniors in a rigorous curriculum with an emphasis on math and science, while seniors take freshman classes at WPI, completing a full year of college before having graduated from high school. Since its inception, Mass Academy has graduated over 1,000 students who are ready to make an impact in the world around them, so it was only fitting that the day began with the presentation of student work.

Visitors had the opportunity to check out apps created by groups of three or four at the Apps for Good fair. Many of the apps stemmed from a desire to create solutions to problems the students experience firsthand in their own lives: NutraLink provides detailed information about the vitamins and minerals found in produce; ChoreCloud turns household tasks into a friendly competition for children; Decisions: The College Finance Game helps students with budgeting; and Imagine: VR Painting gives artists of all skill levels the opportunity to create art in a virtual reality environment.

Sam Pendergast ’18, and his group created Find Furry Friends, an app that helps users find adoptable pets near them or post information about pets they want to surrender; it was inspired by his community service work at Yankee Golden Retriever Rescue in Hudson.

“We’re required to complete a certain number of community service hours per year,” Pendergast explained, “and I volunteer at the shelter. All of the dogs currently in the app are up for adoption there.” One of the team’s plans for app expansion involves the addition of dogs and cats at other area shelters.

Following the app demonstration was a two-part symposium called “Changing Our World.” Part one, “Building the STEM Pipeline,” was moderated by WPI President Laurie Leshin, and featured a discussion on the future of STEM among Dava Newman, Apollo Professor of Astronautics at MIT and former deputy administrator for NASA; Kevin O’Sullivan, president and CEO of Massachusetts Biomedical Initiatives; and Paul Reville, Francis Keppel Professor of Practice and Educational Policy and Administration at the Harvard Graduate School of Education, and former secretary of education for the Commonwealth of Massachusetts.

Mass Academy alumni had the chance to catch up during
the reception.

The panelists touched upon a range of topics including the importance of celebrating failures and adapting to setbacks while learning, balancing local and global impact, encouraging more activism among STEM students, and supporting cross-disciplinary collaboration.

“The best way I know how to be excellent is to put more people with different perspectives and different training together,” said Newman. “I don’t need a bunch of people who think exactly like me … what I need is for people to say, ‘Did you think about it this way?’ or ‘Have you tried it like this?’”

The panelists were also quick to express their excitement in seeing what Mass Academy graduates will do next. “Show up, get out there, and continue to give. Keep bringing people together to change the world … keep us moving forward. I know we have problems in this world, but you’re the ones who are going to help solve them,” O’Sullivan said. “Understand that you can make a difference, and you will, but be patient and relax; it will come if you work hard. People will recognize you.”

Part two, “How Mass Academy Prepared Me for the Real World: The Alumni Perspective,” featured three alumni—Tommy Boucher ’01, Maggie Frost Groll ’05, and Andy Ross ’97—who reflected on their time at Mass Academy and how it impacted their lives after graduation. 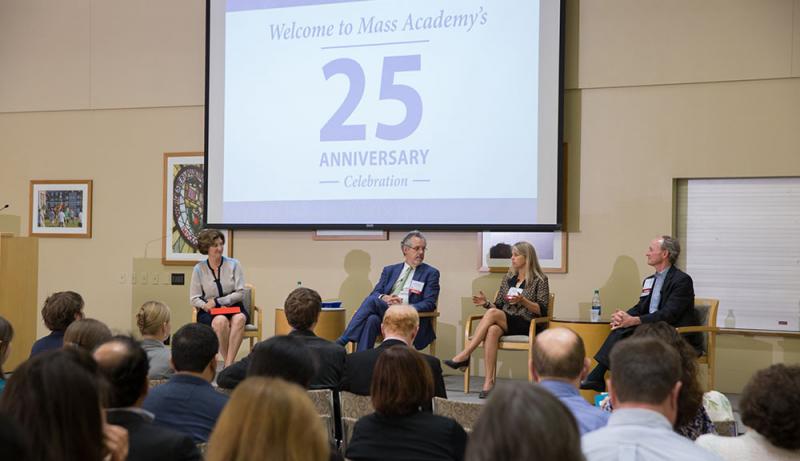 Although Boucher, a Marine Corps veteran and PhD candidate who is now a participating scientist on the Mars rover Curiosity, initially struggled with the academic pacing of the Academy, he graduated having learned practical ways of thinking and skills that he still uses to this day. Boucher credits the Academy with giving him lifelong friendships; it’s also where he met his wife. “All of my oldest and closest friends are people I met at the Academy,” he said.

​Groll, a search and rescue helicopter pilot, credited Mass Academy with instilling in her a pattern of thinking and learning she refers to as thinking outside the book. “The Mass Academy experience is just as much about how to learn as it is how to think about what it is that’s being learned,” she explained. As a pilot, Groll has manuals for everything, but sometimes she’s faced with problems that don’t have simple black-and-white answers and must work to determine the best decision in the moment, a challenge she learned to tackle during her time at the Academy.

“I think of myself as someone who just likes to make stuff with other people, and hopefully that stuff brings joy into the world, and that sense of creative collaboration started [at Mass Academy],” Ross explained. He went on to dissect OK Go’s thought process when it came to developing their video—they choose one vague idea or location, get into that environment, then experiment from there—and detailed how they try to immerse themselves in idea after idea until they find ones that inspire wonder and surprise.

“This may seem overwhelming, but for someone who’s looked for the solar system in the park or estimated all the letters in the WPI library or created a hair dye that changes colors in sunlight,” Ross said, citing projects and lessons he’d completed during his time at the Academy, “it’s much easier to find the joy in all the complexity.”

In addition to the academics and the influence of faculty members, all three panelists cited their classmates as being an invaluable part of their experience at the Academy. “It’s one big nerd melting pot where kids who may have felt out of place in their hometown schools can finally come together and feel like they belong,” Boucher explained. Ross added that the atmosphere wasn’t competitive; instead, it fostered a deep sense of collaboration and connection among the students.

The evening concluded with congratulatory remarks from Sen, Michael Moore, National Consortium of Secondary STEM Schools president Russell Davis, and Lt. Gov. Karyn Polito, as well as the unveiling of a new recognition, the Jon Strauss Award for Innovation in Education. 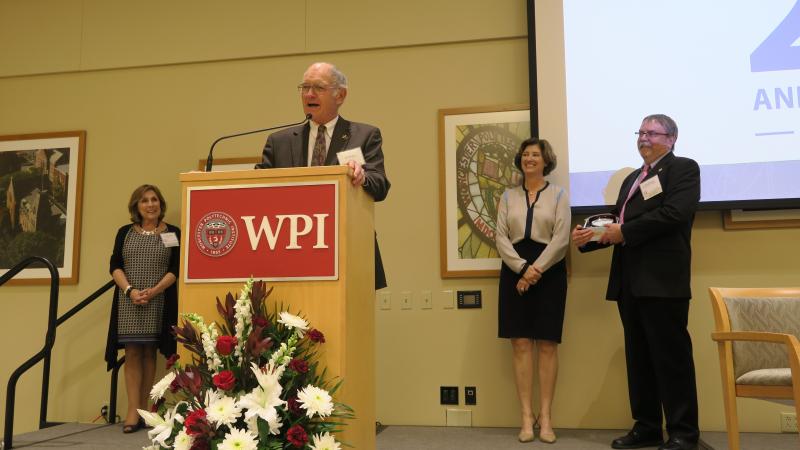 Jon Strauss (center) addresses the crowd before accepting
his award.

Named for Jon Strauss, the thirteenth president of WPI who agreed to support and host Mass Academy in 1992, the award recognizes educators who take risks in developing and delivering innovative approaches to teaching and learning; and emphasizes the impact that science, engineering, and math must have in solving the world’s most important challenges.

The award aims to recognize an individual who exemplifies the spirit Strauss showed back in 1992, so it’s only fitting that its first recipient was Strauss himself.

“The announcement of the new Jon Strauss Award and its presentation to me … while a complete surprise, was one of the most meaningful recognitions of my career for which I am very grateful,” Strauss said. “I look forward to being able to participate in its presentation to deserving members of the Academy in the future.”

While Mass Academy is undoubtedly impressive on paper, it takes on an entirely new dimension when its students and alumni discuss the impact the school has had on their lives firsthand. When one hears their stories, what they’ve learned, and the friendships they’ve made, there’s no denying that Mass Academy is a special place.

“[Mass Academy] was a huge deal to me,” Ross said. “I hope it stays as special to others as it was to me.”