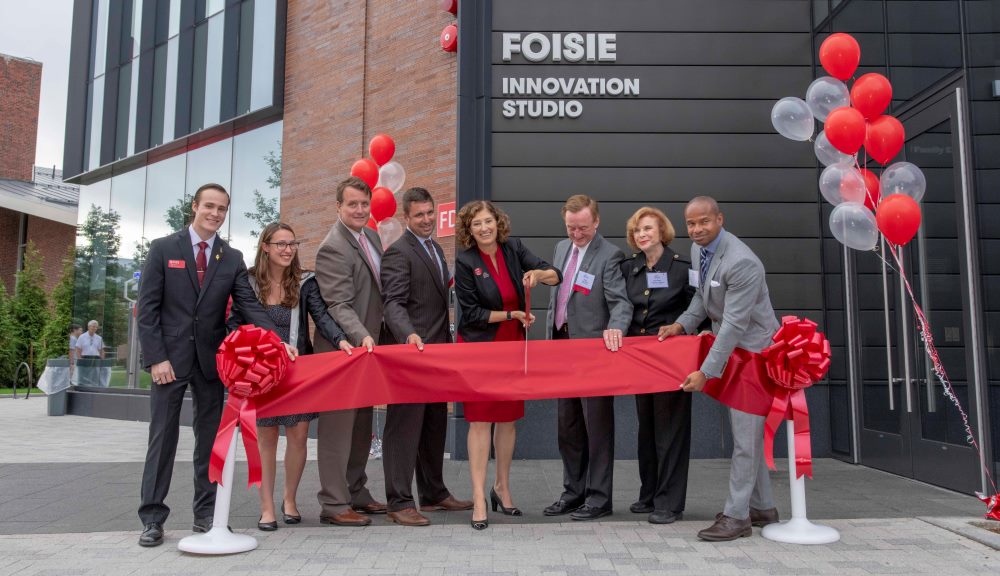 President Leshin holds the scissors as the ribbon is cut for the Foisie Innovation Studio and Messenger Hall (caption below).

Calling it “the front door to innovation,” President Laurie Leshin described the building as the physical embodiment of the “modern WPI Plan”—the university’s distinctive project-based education, a curriculum that blends classroom learning with hands-on, real-world experience, which was launched in 1970.

“WPI’s founders had a mission to educate students by blending learning with doing—Theory and Practice.  Today, this remains at the heart of who we are, and is reflected in the two towers of our campus’s original buildings,” said President Leshin. “And now, with this newest building, not only will we focus on theory and practice, not only will we focus on thinking and doing—but we will also consider intentionally the meaning that our work has, and the impact that work has in the world . Today we cut the ribbon on the third tower of impact.”

The $49 million, 78,000-square-foot residential and classroom facility was funded, in part, through an alumni-led fundraising campaign that garnered more than $18 million and included a challenge grant from the George I. Alden Trust that inspired more than 1,300 donors to contribute to the campaign. The building is named in honor of the late Robert A. Foisie ’56, and for Priscilla and George Messenger Jr. ’51.

Bob Foisie’s lifetime commitments provided the funding to help more than 600 students realize the dream of a WPI education. The Messengers have long been devoted to supporting students, as well; in 2001 they established the Scholarship Fund, and have made generous commitments to that fund over the years.

The first and second floors of the new building include a teaching laboratory currently configured as a robotics lab, a makerspace, and high-tech classrooms for the Great Problems Seminar, courses that introduce first-year students to WPI team-based projects. The Center for Innovation and Entrepreneurship, led by newly recruited Executive Director Donna Levin, supports the “practice” side of WPI’s motto by helping students find paths to commercialization for their projects.

Numerous spaces throughout the building are named for donors who enthusiastically supported the university’s vision, including:

The Messenger Residence Hall includes 140 beds in double and single rooms, with tech suites and common lounges on each floor, and sweeping views of campus and the city. Auntie Anne’s Pretzels and Planet Smoothie, on the building’s first floor, offer smoothies, hot pretzels, and other snack foods.

Designed by Boston-based architectural firm Gensler, the Foisie Innovation Studio and Messenger Hall was built by Shawmut Design and Construction, of West Springfield, Mass. The project was managed by KVA Building Industry Consultants of Boston.

The ambitious project was completed in just two years, from groundbreaking in May 2016 to move-in day in August 2018. It incorporates the WPI limestone seal and scrollwork, salvaged from the façade of Alumni Gymnasium, along with a number of grotesques, into the new exterior wall of Harrington Auditorium, which had been connected to the old gym. The grotesques are mounted amid an iron lattice work that is expected to fill over time with ivy and invoke the ongoing commitment of WPI’s alumni to the evolving campus.