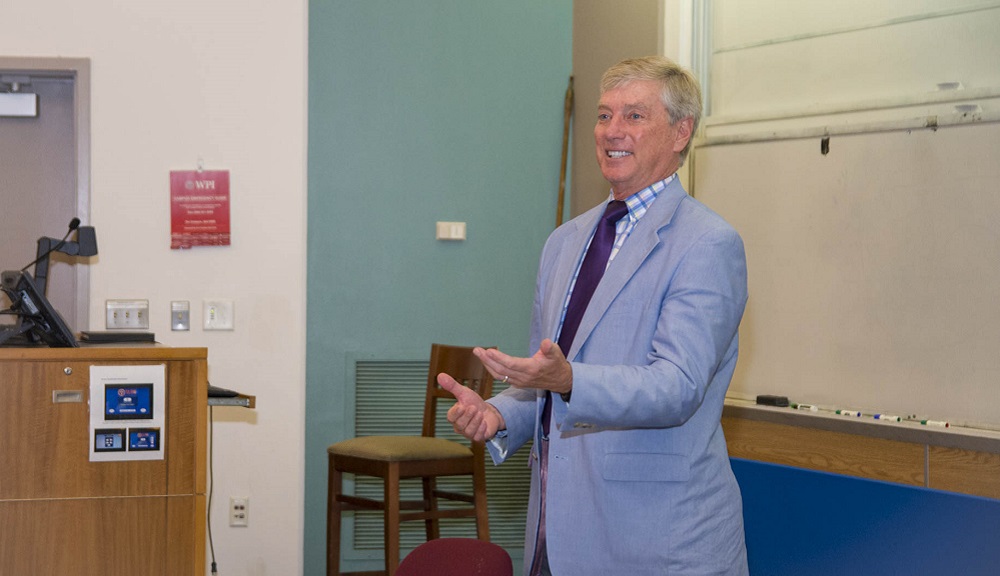 Five years ago, WPI’s Office of Intellectual Property and Innovation (IPI) was born, reflecting a shift in how WPI gets the most out of the important research accomplishments of its faculty and students.

Brought to the university by IPI director Todd Keiller, that shift persists today in a dramatic emphasis that goes beyond simply seeking patent protection for intellectual property generated at the university to actively finding ways to move toward commercializing the research.

The results can be seen in the statistics on the number of research efforts that have been licensed for development by start-up or existing companies.

When Keiller arrived in 2011, the university had over 300 patent cases in various stages but none of the research was licensed to a company to develop its commercial potential, according to IPI’s 2017 annual report. Now 43 of 138 active patent cases—31 percent—have been licensed and 25 have reimbursed the university for patent expenses.

“My priority is getting licensing done,” says Keiller. “Just having a patent for the sake of having a patent doesn’t make sense unless you have an opportunity to market that particular intellectual property.”

Patents protect the work of inventors from infringement. Licensing gives existing companies or start-ups the right to use inventions or other intellectual property for commercial gain, while laying out what percentage of profit goes to the inventor, the university, and the company.

Faculty who use WPI resources to develop their discoveries share any financial benefits with the university on a 50/50 basis. Students who use significant WPI resources can take that approach—or if they agree to pay for their own patent expense, the university gets 1 percent of future royalties.

Under Keiller’s guidance, the IPI office continues to work to protect ideas at the patent office via a provisional patent for research projects presented to it. But over the past five years the staff has intensified efforts to move ideas along toward commercial potential and to provide researchers with resources to market these ideas.

Not only does licensing offer the possibility of future royalties, but it also can lead to the creation of jobs. “Licensing, I think, makes all the difference for long term viability,” he says. “You begin to get reimbursement for patent expenses and eventually royalties will flow as products reach the market. Several companies are reimbursing us for patent expenses, which is important so we can reinvest that in new ideas without needing more budget to do it.”

“Increased reimbursement of patent expense will allow WPI to do more with intellectual property without additional budget, and emerging royalties will not only reward inventors but WPI’s share can be reinvested in the research enterprise,” he says.

In this past fiscal year, reimbursements covered 25 percent of the patent expenses, he says. “I want to get up to 40 percent, which is the national average, and I think we stand a very good chance of doing that in the next few years.”

The shift in approach is evident in greater outreach by the IPI office to seek out projects, discoveries, and inventions on campus with commercial potential, leading to a record 52 disclosures from researchers in the last fiscal year. Though 38 of last fiscal year’s 52 proposals were filed for provisional patents, the focus on moving promising projects along toward commercial viability has intensified.

“Increased reimbursement of patent expense will allow WPI to do more with intellectual property without additional budget, and emerging royalties will not only reward inventors but WPI’s share can be reinvested in the research enterprise.” -Todd Keiller

IPI office staff, including interns on special fellowships and alumni volunteers, help hone select research disclosures for presentation to the Tech Advisors Network (TAN), a group of 66 alumni and other mentors with real-world marketing experience. An outside law firm runs projects through an algorithm to further establish patent viability. The TAN group has reviewed 84 proposals over the past five years, about 40 of which have come from students and faculty.

Once the project proposals go before the network, smaller TAN teams offer further mentoring and potential investment referrals; IPI staff help researchers gain licensing agreements. A new Accelerate WPI program sends a cohort of teams (mostly undergraduate teams) through an 8-week program of four classes. The emphasis is on “getting out of the building” and talking with a minimum of 30 customers to hone their value proposition. They receive funding to travel to conferences or other ways to obtain these customer interviews.

“That’s where we teach them to talk with customers and conduct customer interviews to see if they have a good idea or not,” says Keiller. “It didn’t exist before.”

The WPI Accelerator fund has provided researchers with investments of up to $50,000 to help with the journey toward marketing success. WPI started the fund with $174,000 and alumni and friends have added $304,000. Currently, there is $74,000 available to invest.

“That’s something I formed when I got here,” says Keiller. “It’s seed capital to get them in good shape where they can attract their first round of financing.”

Battery Resources is an example of a firm that is benefiting from the Accelerator Fund. The company was founded by mechanical engineering professor Yan Wang, former postdoc and now the firm’s CEO Eric Gratz, and founder of WPI’s Metal Processing Institute Diran Apelian to advance research on a sustainable recycling process for Li-ion batteries. This year the accelerator committee has agreed to invest funds in the company, which was a finalist last year in the Mass Challenge start-up competition. The company has obtained Phase I and Phase II funding from a Small Business Innovation Research grant and is completing its first round of financing.

"We hope that some of our earlier licenses will start releasing products on the market in the next few years. We’ll begin tracking new jobs and funding raised from our start-ups. Hopefully that will contribute a steady increase of employment in the local community.” -Todd Keiller

Over the years the IPI office has assisted researchers across a wide variety of scientific disciplines.

Biomedical engineering professors George Pins, Kevin Cornwell, and Kris Billiar were helped by the IPI staff in obtaining a patent for work on biopolymer microthreads used in developing a patch that can be applied to the heart muscle after a heart attack. The work on the patch has been awarded a three-year, $452,000 National Institutes of Health grant.

WPI biotechnology professor Reeta Rao and University of Massachusetts Medical School professor Paul Kaufman had IPI assistance for a patent on research that discovered a compound that can be used to prevent a serious and widespread fungal infection. Researchers Jessica Da Roas-Spiegler and Amed Fazly's names are also on the patent.

Mechanical engineering professor Chris Brown along with former students Tina Dutra, John Foody, Samuel Hastings, Richard Malcolm, and Patrick Wall obtained a patent with help from the IPI for a device for measuring the sharpness of ski edges.

Centauri Surgical Systems, which has grown out of the research of mechanical engineering professor Greg Fischer, develops MRI-guided surgical platforms for neurological procedures. The procedures allow surgeons to precisely access the brain and spine, providing rapid, automated delivery of diagnostic and therapeutic instruments and drugs.

AM Protection, which was founded by graduate students Todd Alexander and Lindsay Lozeau along with professor and dean of graduate studies Terri Camesano, has a patent pending on a coating of medical device surfaces that acts as an antimicrobial to prevent infection. The company is targeting the urinary catheter market.

Keiller expects licensing activity to remain strong. One license was signed in July and five more are in the pipeline, according to the annual report.

"We hope that some of our earlier licenses will start releasing products on the market in the next few years,” he says. He notes that 11 companies launched through IPI are in the Worcester area. “We’ll begin tracking new jobs and funding raised from our start-ups. Hopefully that will contribute a steady increase of employment in the local community.”