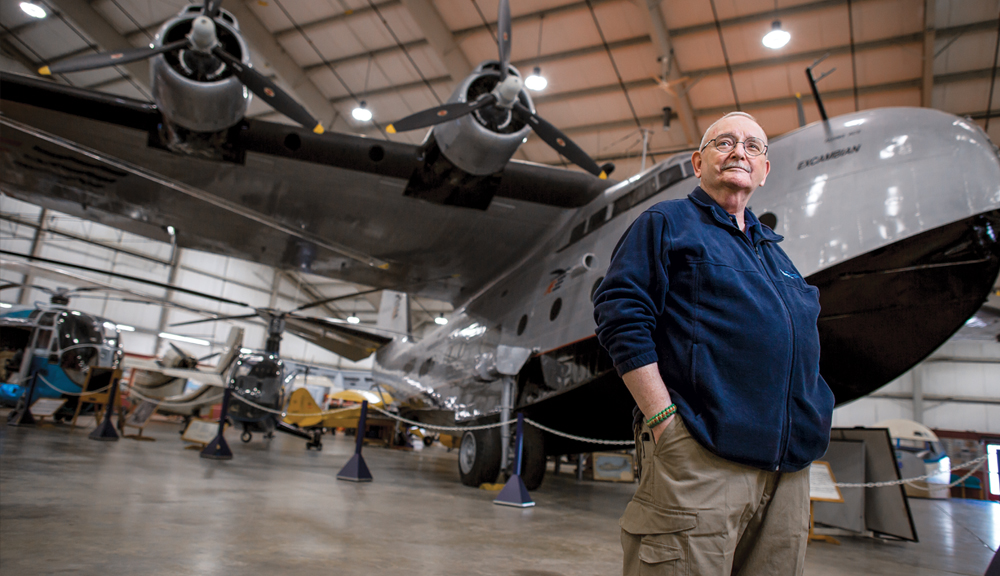 Mort Gutman ’65 ME began taking flying lessons in his senior year at WPI and discovered a love of aviation. “It was just a half hour on Sundays from a local guy who’d been a WWII flight instructor—who didn’t even charge me,” he recalls.

Upon graduation Gutman enrolled in the Air Force, ending up at Plattsburgh AFB in upstate New York as a navigator B-52 radar navigator. It was there he wed his love, Marilyne—this year they’re celebrating their 51st year of marriage.

His next move came in 1970, when he received what he calls an all-expenses-paid trip to the Far East. “It was with a large tour group,” he quips, “and we all wore the same clothes.”

He served on a team flying B-52s out of Guam, Okinawa, and Thailand. With over 60 combat missions—a quarter of these as lead navigator—he rose to the rank of captain and instructor navigator. “GPS wasn’t even a dream back then, and Guam, in particular, was a difficult navigation job. No mistakes were allowed while trying to find a small island in such a large ocean—while getting low on fuel.”

Back in civilian life, Gutman earned an MBA and worked in production management, sales, and marketing. Through it all, it was his service as volunteer firefighter, EMT, and paramedic that made him feel most alive. Eventually he sold his business and devoted himself to public service.

Along the way, he flew small planes as often as he could. “It really is quite lovely and challenging up there,” he muses. “And I maintained an interest in military aviation, trying to keep up with the latest developments.”

But when his knees demanded a break, he became a public safety dispatcher, answering 911 calls, dispatching police, fire, and EMS vehicles.

Now with retirement upon him, Gutman says he still yearns for aviation of any type. Three years ago, having seen an ad for the New England Air Museum in Windsor Locks, he went for a visit—and found his new home. He joined a group of 150 volunteers, starting out as a docent; he’s now a museum educator, helping elementary children discover the world of aviation through science and history.

With every class of 3rd to 8th graders who come through the Museum, Gutman says he witnesses quite a few students who connect with the science behind aviation in a new way. He can almost see the wheels spinning in their heads as he talks about drag and lift or the difference between steel and aluminum. “When that happens, I really feel good about it. After all, the whole program is for the school’s STEM curriculum, and to get the students excited about it.”

With an engineering degree, military and civilian flying backgrounds, and a continuing love of all things aviation, Gutman says he has a lot of knowledge to share and a desire to impart that love onto a new generation.

It seems this former bombardier has finally found his true calling—unexpectedly not in the skies, but in a hangar on the museum grounds.