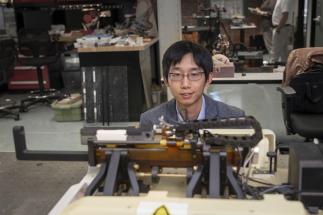 A biomedical engineer at Worcester Polytechnic Institute (WPI) is creating a new medical robot that uses minimally invasive technologies to safely and accurately detect and monitor prostate cancer, the second-leading cause of cancer-related deaths among American men.

Haichong (Kai) Zhang, assistant professor in biomedical engineering and robotics engineering, received a five-year $1,869,423 Director's Early Independence Award from the National Institutes of Health (NIH) for his ongoing work to create a robotic system that will detect and analyze three different indicators of prostate cancer: a 3D image of any mass; high levels of a protein produced by cancer cells; and tissue with low-oxygen levels caused by cancer growth.

By simultaneously focusing on these different but complementary signs of prostate cancer, Zhang expects his system will be more accurate than current tests like ultrasounds and biopsies unguided by MRIs. His work also may eliminate the need for radioactive contrast dye, which is used in traditional scans and poses other health risks.

“One fifth of men will be diagnosed to have prostate cancer in their lifetime and the recurrence of it is very high,” said Zhang, who is the PI on the research project, “Multiparametric Photoacoustic Imaging-Based Identification of Aggressive Prostate Cancer” (DP5 OD028162).

“Right now,” he said, “the best methods for detecting prostate cancer early are not nearly as accurate as we need them to be, and they are not risk-free. My goal is to create a minimally invasive, easily accessible, and cost-effective way to better detect this cancer.”

According to 2016 cancer data from the NIH, prostate cancer was the most commonly diagnosed non-cutaneous cancer and nearly 200,000 new cases were diagnosed in the U.S. that year. Diagnosis of prostate cancer generally involves a blood test to check for prostate-specific antigens (PSA) that may indicate cancer, a manual rectal examination, biopsies, and ultrasounds. Biopsy samples taken randomly often lead to the underestimation of a high-risk prostate cancer, false negative diagnoses, and the need for repeat biopsies. The NIH reported that the grade or stage of prostate cancer was only accurately determined in 37% of biopsied cases. 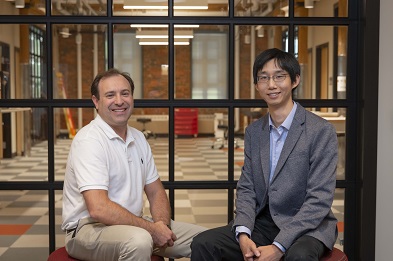 Zhang and Gregory Fischer, professor of robotics engineering and a widely known pioneer in the emerging field of MRI-guided robotic surgery, will create a surgical imaging robot that works within an MRI machine to insert an imaging probe into the patient’s rectum, adjacent to the prostate. Once an image is captured, the probe will be robotically manipulated so it can capture other images from slightly different angles, ultimately compiling a 3D image of the prostate and any tumor that is present. This technology will show the tumor in earlier stages than an ultrasound image, which generally shows the structure of the prostate but not a tumor’s location, and often fails to detect early stage tumors. The robotic system also is being designed to conduct guided-needle biopsies. By using the photoacoustic system, the robotic arm can pinpoint the tumor and specifically target it.

Zhang’s robotic device will use photoacoustic imaging, which is the combination of optical imaging and ultrasound, pulsing light into tissue and receiving acoustic waves in return. The acoustic signal provides information about the health of the tissue, which a traditional ultrasound does not. Different kinds of tissue emit different kinds of acoustic waves so the system will be able to differentiate between healthy, well-oxygenated tissue and tissue that is hypoxic, or depleted of oxygen. Cancer cells reduce the transportation of oxygen and nutrients in surrounding blood vessels.

“Three-D images, PSMA detection and hypoxia detection are all complimentary,” said Zhang. “They all give us different clues, different approaches to detecting cancer at a much higher sensitivity. That means we should be able to detect prostate cancer earlier when it’s much more treatable.”

Fischer said he is excited to work with Zhang to create the next-generation of his MRI-guided robot for prostate cancer detection and treatment. “With Zhang’s technology, we’ll have a greater ability to identify a mass and to directly target it with a biopsy needle. That’s key.”

Zhang also is working with researchers at Johns Hopkins University to develop a non-radioactive contrast agent that can be used during the photoacoustic imaging to target PSMA, a specific protein expressed in prostate cancer that may indicate the presence of an aggressive form of the disease. This may eliminate the need for current contrast agents, which are radioactive and can pose additional health risks.

The NIH Director's Early Independence Award, established in 2010, is part of the organization’s High-Risk, High-Reward Research Program, which supports what the NIH describes as “exceptionally creative scientists pursuing highly innovative research with the potential for broad impact.” The award provides an opportunity for junior scientists who have recently received their doctoral degrees or completed medical residency to skip traditional post-doctoral training and move immediately into independent research positions. Thirteen such awards will be made for 2019.

Zhang earned his PhD in computer science at Johns Hopkins. While there, he received a nearly $200,000 grant from the Department of Defense and the Congressionally Directed Medical Research Programs to work on imaging research related to his current project.