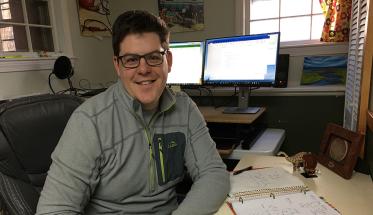 WPI Scientists Forge Ahead and Continue Research at Home 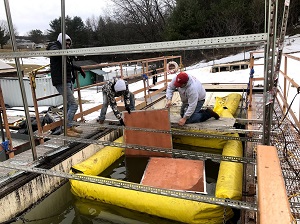 It took months of planning, weeks of prototype building, and five days of assembly during early March at a New Hampshire research center for Ali Rangwala and his laboratory associates to set up a series of experiments testing a new technology to clean up offshore oil spills.

Rangwala, a professor of fire protection engineering at WPI, and his colleagues unraveled miles of wiring at a giant salt-water tank at the U.S. Army Corps of Engineers Cold Regions Research and Engineering Laboratory (CRREL) in Hanover. They stowed their instruments and drove home to regroup.

“It took two days to pull out all the equipment and instruments,” says Rangwala, who now holds weekly video conferences with the graduate students he advises and is writing applications for grant money to restart the experiments in the future.

“Everything is in boxes now.”

Across WPI, faculty and students have been making similar adjustments to their research activities. Some are digging into data they had already collected, reading scientific reports, writing journal articles, and planning for the day they can return to their laboratories.

“We hope we’ll get back to work in our labs sooner rather than later. We’re already designing new experiments,” says Albert Simeoni, professor and head of the Fire Protection Engineering Department. “We’re on the starting blocks. We can’t wait.”

Research is no small enterprise at WPI. The university’s researchers are on track to take in $47.5 million in funding for research during the current fiscal year, a record amount. Even as WPI closed nearly

all campus operations, public and private grants have continued to flow into university researchers. 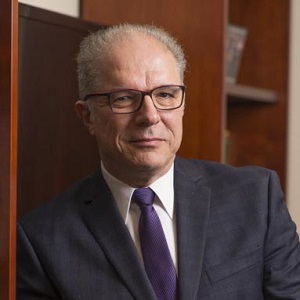 “This period of severely limited access to campus has been challenging, especially for those involved in lab research, but WPI’s research enterprise remains active,” says Bogdan Vernescu, vice provost for research. “Research support offices continue to work remotely, and a small group of essential personnel are maintaining critical assets by tending to lab animals and maintaining cell and tissue cultures, essential equipment, materials, and the research computing infrastructure.”

Still, COVID-19 has changed things. Kristen Billiar, professor and head of the Biomedical Engineering Department, asked researchers in his department weeks ago to prepare for limited campus access. Researchers’ mammalian cell lines were frozen in liquid nitrogen, he says, and one person was designated and approved by the university’s Coronavirus Emergency Response Team (CERT) to regularly visit the department’s Gateway Park site to keep the coolant flowing.

“We’re all hunkering down with experimental data and reading the literature,” Billiar says.

Students of Haichong (Kai) Zhang, assistant professor of biomedical engineering and robotics engineering, worked late into the night for more than a week before campus closed to make sure they’d have the data they needed.

“We just had to accommodate the situation,” says Zhang, who is developing a safer, more accurate way to detect prostate cancer. “It’s like preparing a lot of food before winter. When we saw this coming, we prepared a lot of data on our experiment. We gathered as much as possible so we could focus on data analysis and prove our hypotheses. Once we process that data, we can publish it at a conference or in a journal.”

Amity Manning, assistant professor of biology and biotechnology, says her lab uses cell culture and animal models to study cancer progression, so closing the campus meant no new experimental progress could be made until it becomes safe to return. The lab’s researchers are deciding how to position manuscripts and grant proposals that were awaiting data from additional experiments.

“The wrong decision could lead to a gap in publications or funding that will impact the trajectory of the whole lab,” Manning says. “This same story is repeating in research institutes across the world.”

For Eric Young, assistant professor chemical engineering, this time is all about “finding a way forward” so his research can continue even from a home office or dining room table. Without materials for experiments or a safe space to do the work remotely, Young and his team are focusing on computational work to support the data collected from experiments they had already done in the lab.

Young also is working with his different funding agencies to get some leeway on expected deliverables and deadlines, and he is writing grant proposals as well as a book chapter on epigenetics in plant systems with Susan Roberts, professor and head of the department of chemical engineering. Roberts says she’s been busy with a “backlog of papers,” while also helping her students with their own papers.

The campus shutdown meant Jagan Srinivasan, associate professor of biology and biotechnology, had to suspend lab work with different genetic versions of

C. elegans, tiny worms that his team studies to understand connections between the nervous system and social behaviors.

Instead, graduate students and research associates took home data to analyze, he says. Now they hold video conference meetings and conduct a weekly “journal club,” in which the scientists chat about research articles they have read.

“We were in such an amazing place at the beginning of January,” Srinivasan says. “Research was going great. Then COVID-19 threw a monkey wrench in everything. Shutting down my lab is not what I wanted to do, but at the same time, my lab is my family, and I do not want anything happening to them.”

For some who don’t need access to wet labs, like Randy Paffenroth, associate professor of mathematical sciences and data science, moving from working on campus to working from home has been an easy transition.

“It hasn’t been a hardship at all,” says Paffenroth, who is working on research to protect U.S. soldiers from chemical attack. “We’re still writing, driving equations, proving theorems, and processing large data sets. That entire spectrum can be done relatively easily online. As long as we can communicate with each other, we can bat around ideas and discuss problem solving. As long as the big computing resources at WPI are up and running and I have access to them, anything I can do from campus, I can do from home. I’m extremely lucky.”

Faculty members say they particularly want to motivate, encourage, and support the students associated with their labs, even though everyone is separated.

“I think the most important thing is we’re making sure our people are feeling good, engaged, and finding things to do,” Simeoni says. “Research is a strange thing. When you’re a master’s or PhD student or faculty, research is kind of your baby. It’s really important. I want my students to feel they’re in the best position to still do something, still feel productive, still have my attention, and that we’re still a functioning team.”

Rangwala is now teaching an online class and checking in regularly on his lab members, some of whom have returned to their homes overseas. The tests they halted at CRREL would have examined the performance of new versions of the Flame Refluxer, a metal blanket designed to float on and help burn offshore oil spills.

Shutting down the tests was disappointing, Rangwala says, but the correct thing to do.

“If you pull back, what is the worst thing that can happen?” he says. “It would have been far worse to go forward and risk the health of my  WPI students, staff, and lab colleagues."

—By Sharon Gaudin and Lisa Eckelbecker