As a WPI undergrad, Guillermo knew his experiences in WPI’s hands-on projects would help him in whatever work he took on after graduation. But as a co-op in the Tesla Motors Fremont, California facility, he found his rigorous undergraduate training prepared him so thoroughly that he could not only hold his own among peers but also have fun in a challenging professional environment.

Given the independence and time to thoughtfully complete increasing responsibilities, Guillermo‘s co-op enhanced his workplace expertise in robotics engineering and interpersonal relationships. At Tesla, he led three projects improving robotics systems that built the powertrain system for both the Tesla model S and X. 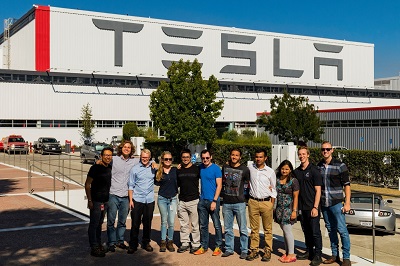 Because of the co-op’s longer time commitment, Guillermo completed intricate tasks, like designing and establishing a live conveyor map through a Human Machine Interface (HMI) program to identify and troubleshoot production line problems. Guillermo’s Tesla mentor and manager gave him the freedom to take on greater responsibility and treated him as a team member who could shut down machines when reprogramming or modification was necessary, act as a liaison between the technicians and department managers, and consult with production workers about equipment issues.

And the hands-on projects so valuable at WPI helped when Guillermo was tasked with the design and machining of EoAT (End of Arm Tooling) for Epson and Fanuc robots, creating a calibration process for the Fanuc robotics systems, and designing nominal battery cells for robot user frame setup.

Guillermo hopes to work in the automation field of the robotics industry or work on navigational robotics and his Tesla co-op network gave him a significant base of future professional contacts. 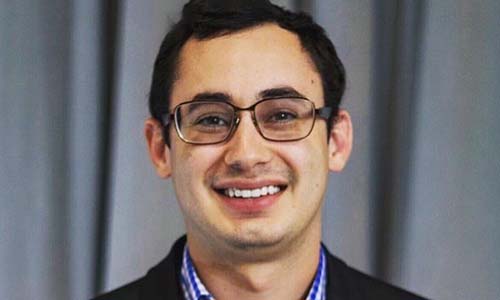 I ride my bike to work – and get paid for it – and have breakfast with fellow interns.

I get to my desk to assess, prioritize, and create a plan of execution for every single project I have before the team’s daily meeting.

I work on projects I was tasked with. That might be notifying the production line that I am taking a machine offline for retrofitting, upgrade, or calibration. If I am notified that a machine in my production line has faulted, I need to figure out what’s wrong and fix it.

I lunch with other interns.

I spend the rest of the day working through my tasks and dealing with the unexpected emergencies or situations that can crop up. I might need to take a machine offline after a shift change. Frequently, other interns will accompany me so they can see how much I am responsible for.

After riding my bike to the gym after work, I get in a good workout to relieve stress, and then ride my bike home.

At home, I eat dinner and then spend the rest of the night hanging out with my roommates – fellow Tesla interns.

To any student considering a co-op, it is a must.
I was able to work on any project I found intriguing.
As a team worker, I wasn’t just a typical intern in a team I was part of the team.