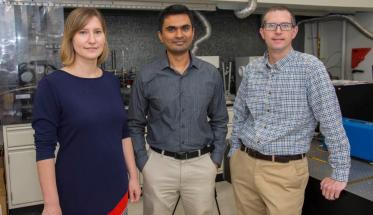 The first project is focused on discovering new materials for solar cells that could boost their efficiency and make them less expensive to manufacture. The second seeks to lower the cost of producing hydrogen using solar energy or electricity from other clean energy sources. (Generating hydrogen could be an effective way to store solar energy). The projects are led by Pratap Rao, assistant professor of mechanical engineering.

“We are excited about these projects because of the impact they can have on clean energy in the future,” Rao said, “and because they are very interesting problems to tackle.”

Exploring New Materials to Expand the Use of Solar Energy 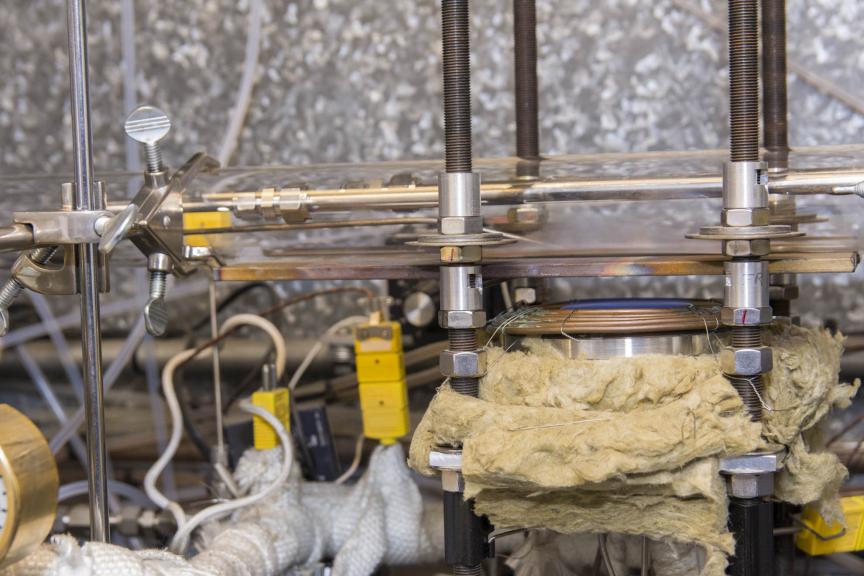 A flame-assisted sublimation apparatus in the WPI NanoEnergy Lab being used to make photocatalysts. 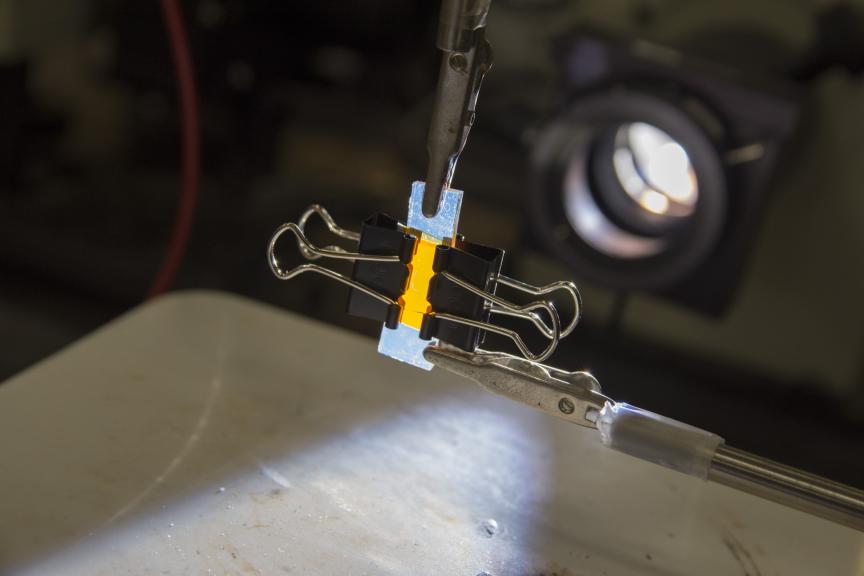 A sample solar photovoltaic cell being tested in the NanoEnergy Lab. The clips are capturing the electricity it generates. 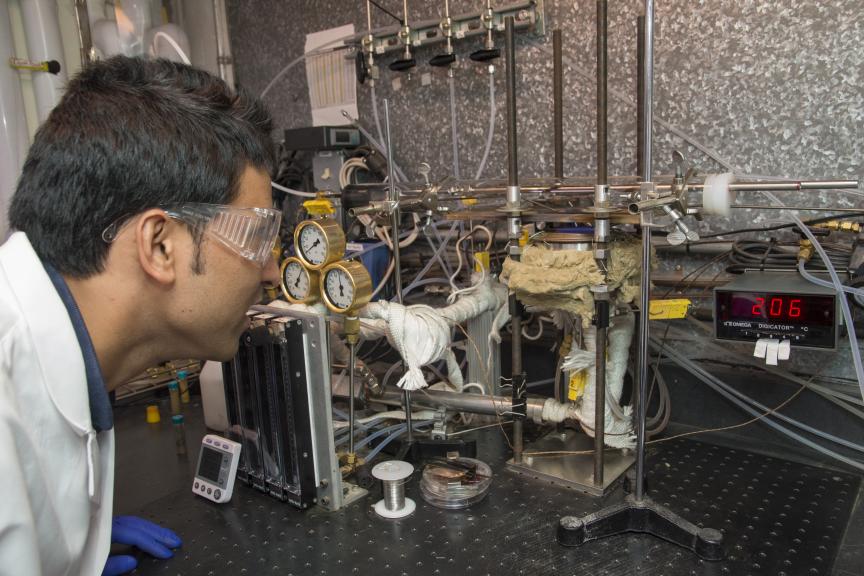 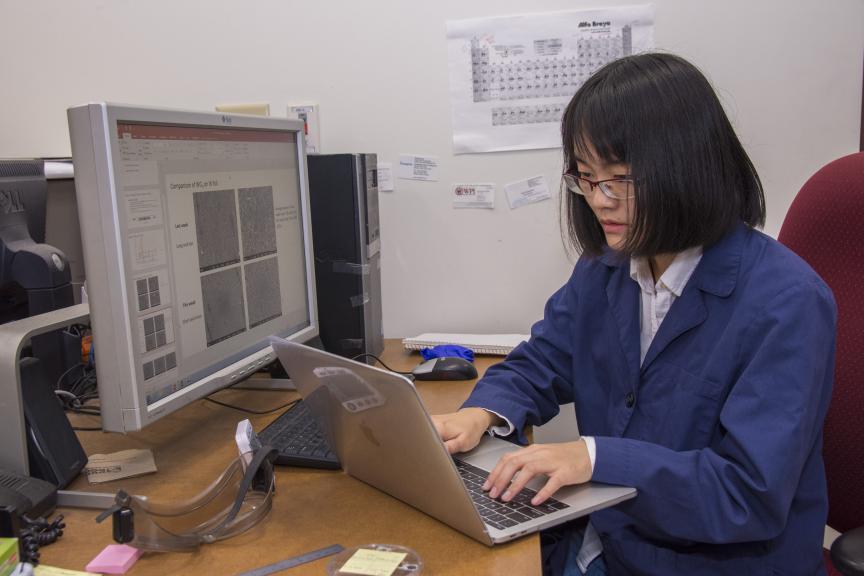 PhD student Tao Yan (materials science and engineering) studies the nanostructure of the materials used in the NanoEnergy Lab. 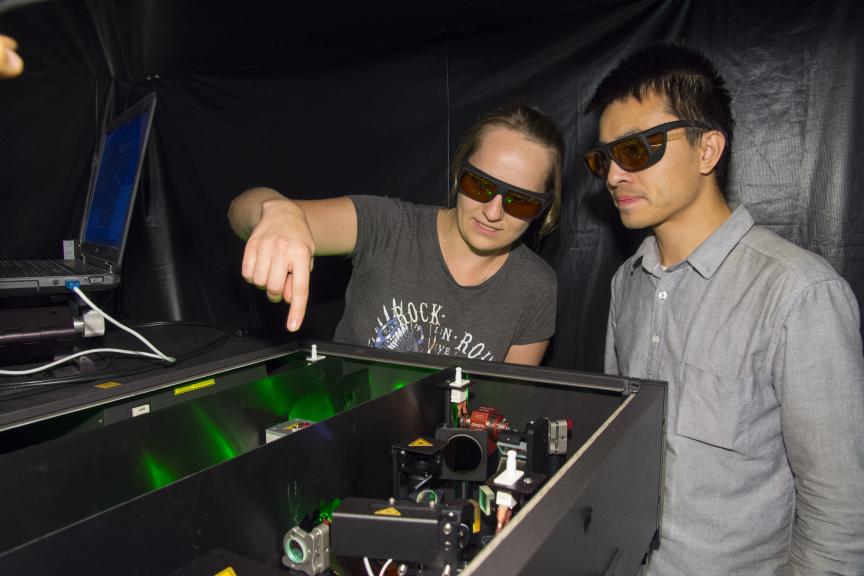 Rao received a three-year, $314,065 award from the NSF in early August to develop a lower-cost catalyst for an electrochemical process that can generate hydrogen from water. He is working with co-principal investigator Aaron Deskins, associate professor of chemical engineering, on the new award.

The grant complements a $409,274 NSF award received in 2016 to fund the development of new, lower-cost materials for solar cells, a project Rao is conducting with Lyubov Titova, assistant professor of physics. All three researchers are core members of the WPI’s new Energy Research Group.

Though sunlight is a clean energy source, a number of issues have hindered its widespread use. One of the most important is its intermittent nature: It’s not always sunny, and sunny periods don’t always correlate with high demand for electric power. Also, if electricity generated from solar energy is not used immediately or stored, it goes to waste. Thus it is important to have a practical way to store solar energy so it can be available when needed.

That’s where the big problem lies, Rao says. Currently, the best options for storage include batteries and pumped-storage hydroelectricity. But the U.S. electric grid does not have a lot of batteries, and pumped-hydro facilities are few and far between. 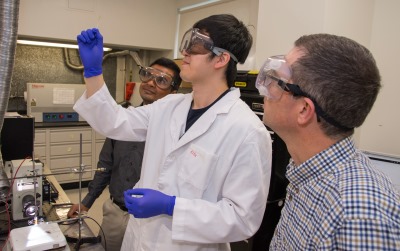 From left, Pratap Rao, PhD student Lite Zho (materials
science and engineering), and Aaron Deskins examine
a sample of a material being tested as a possible
replacement for silicon in solar photovoltaic cells.

With the latest NSF award, Rao and Deskins are focused on a different way to store solar energy—by using the electricity to split water into molecules of hydrogen and oxygen through a process called electrolysis. The two gases can be stored, to be recombined later in a fuel cell to generate electricity when demand warrants. (Hydrogen is also used extensively in the production of fertilizers and chemicals.)

Electrolysis is the cleanest way to produce hydrogen, but because it requires a great deal of electricity and expensive catalysts like platinum, it is costly. For this reason, most of the hydrogen produced in the United States is made from natural gas through a process called steam reforming, which, although cheaper, also produces carbon dioxide, a greenhouse gas. Rao and Deskins are exploring ways to lower the cost of electrolysis through the development of cheaper electrocatalysts. (Catalysts are materials that reduce the energy needed for chemical reactions; electrocatalysts use electricity to drive chemical reactions.)

The WPI team is investigating electrocatalysts like tungsten disulfide, a crystalline material that tends to form sheets that are just three atoms thick. Electricity generated from a renewable energy source, such as a solar cell or wind turbine, can be transferred to the tungsten sulfide sheets through an electrically conductive supporting material. The electricity makes its way to the catalytically active edges of the sheets, where it is transferred to the water molecules, causing them to split into oxygen and hydrogen.

The tungsten disulfide sheets normally lie flat on the supporting material, Rao said, but in that orientation it can be difficult for electricity to flow into them. Rao and Deskins are experimenting with ways to synthesize tungsten disulfide as sheets that sit perpendicular to the surface, like the vanes in a radiator, or into tubes that project up from the surface. In both configurations the edges of the sheets point toward the supporting material. The researchers believe they can also tune the chemistry of the edges to make the electricity transfer more efficient. 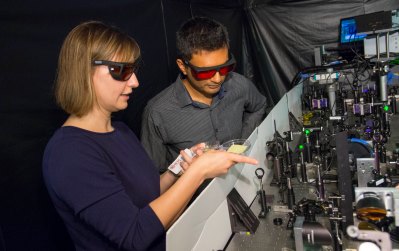 Lyubov Titova and Pratap Rao examine the terahertz
spectroscopy technology in Titova’s Terahertz Physics
Lab that is being used to measure the behavior of
charges within new, more efficient materials that Rao
and his team are developing for solar photovoltaic cells.

With the 2016 NSF award, Rao and Titova are focused on developing new materials for solar photovoltaic cells that are easier to manufacture. “This could make solar cells significantly cheaper,” Rao said. “If they are cheaper, solar cells can be put in more places and more people can use solar energy, including in developing countries where the price of solar cells is still too high.”

Today, silicon is the main material used in solar cells. It’s a good material, Rao notes, because it is abundant, efficient and durable. However, because of its high melting point—more than 1,400º C—it takes considerable energy to make the silicon crystals that are then sliced up to make the cells.

The WPI team has been working to create new materials composed of metal oxides that will be less expensive to produce. The materials being examined can be synthesized at around 500º C, meaning that far less energy will be required to manufacture the solar cells. In addition, since they can be deposited in thin layers through a process similar to spray painting, the new materials will make the process of manufacturing solar cells simpler and faster.

Unlike existing thin-film solar materials, however, the new materials will be composed of only non-toxic elements. Rao notes that there is also the possibility of placing these new materials over existing silicon solar cells to boost their efficiency.

While they are still in the basic research stage, Rao said his team has tested several material combinations and has narrowed down the list of potential compositions to a few possibilities. Titova is using a technique called terahertz spectroscopy to study how the charges inside these materials behave at ultra-short time scales, after they have been excited by sunlight. This knowledge is essential for understanding how these materials produce electricity, and for improving the efficiency of this process.