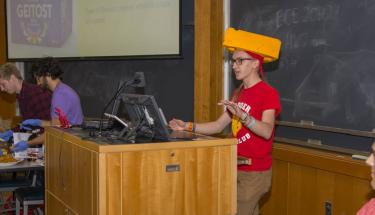 Hankering for some humboldt fog?

Then have we got news for you—WPI’s got a Cheese Club, and it’s bettah than cheddah. 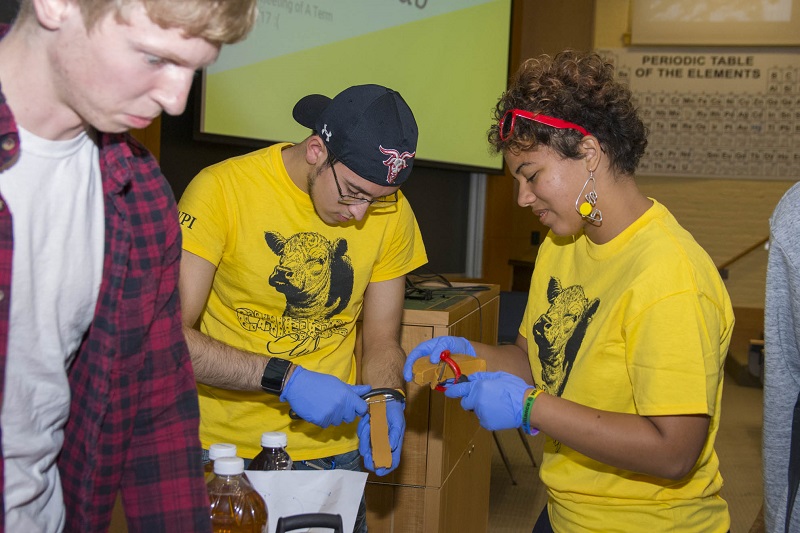 Members of the Cheese Club prepare cheese samples
for the meeting.

“It’s one of the most wholesome clubs I’ve found at WPI,” says club president Ari Trey-Masters. “The whole process is meant to be a de-stresser from the week and an opportunity to meet more turophiles (cheese lovers) on campus.”

The club meets bi-weekly, and each meeting follows a similar format. After Trey-Masters introduces everyone, a quick icebreaker is played before a presentation is given on that week’s cheese (or cheese-related item, such as grilled cheese, mac and cheese, quesadillas, or cheesecake); then attendees are invited to make cheese-themed crafts.

This year, in addition to collaborating with other organizations across campus, the club will host a grilled cheese competition, a fondue party, a dairy-free event for those who are lactose intolerant or vegan, and it will celebrate the return of their “cheesy game night.”

If that all sounds like the best thing since sliced bread (or in this case, cheese), well, you’d be right.

Trey-Masters stumbled upon the club last B-Term, when he heard someone in his PE class mention a Cheese Club email. Once he got his first taste of the club, he quickly rose through the ranks, buying cheese for the club’s meetings and eventually being elected president, with the explanation, “I ran because I wanted to be a part of one of the best clubs I found at WPI.”

“It’s one of the most wholesome clubs I’ve found at WPI.” -Ari Trey-Masters

As one can imagine, it can be hard to pinpoint a favorite memory in a club that’s essentially made of good times and happiness, but for Trey-Masters the answer is easy. He had signed up to buy cheese for the first meeting of B-Term, and invited all his new brothers from Sigma Pi to the meeting. He was pleased to see that three of them had already arrived, but before he could relax, he had to run back and grab plates—when he returned, half of the room was full of Sigma Pi members. “I felt super happy, because not only was I vital to bringing cheese to my friends in the Cheese Club, but I was also able to bring people that I cared about into a club that I cared about, too.”

Trey-Masters’s first favorite cheese is parmesan, hearkening back to his childhood, but if he’s being honest, he finds a new favorite every week. His current favorites, juustoleipa and gjetost, were served at past Cheese Club meetings.

Fellow cheese enthusiasts can check out the Cheese Club to connect with fellow turophiles, or email the club for more information on the next meeting—it’s guaranteed to brie a good time.

This is the first of the "WPI's Got What?" series, highlighting the variety of clubs and organizations at WPI. Check out other clubs that have been profiled as part of the series: