Students, trustees, faculty, staff gather for celebration of the completion of the Foisie Innovation Studio’s framework

The WPI community has been walking by the future home of the Foisie Innovation Studio and Messenger Residence Hall since ground was broken in August 2016. Much progress has been made on the site, and during the sunny afternoon of February 23 the community gathered on the Quad to celebrate a milestone in the new building’s construction: a traditional topping-off ceremony where a ceremonial steel beam was lifted into place, signifying the completion of the building’s steel “skeleton.” 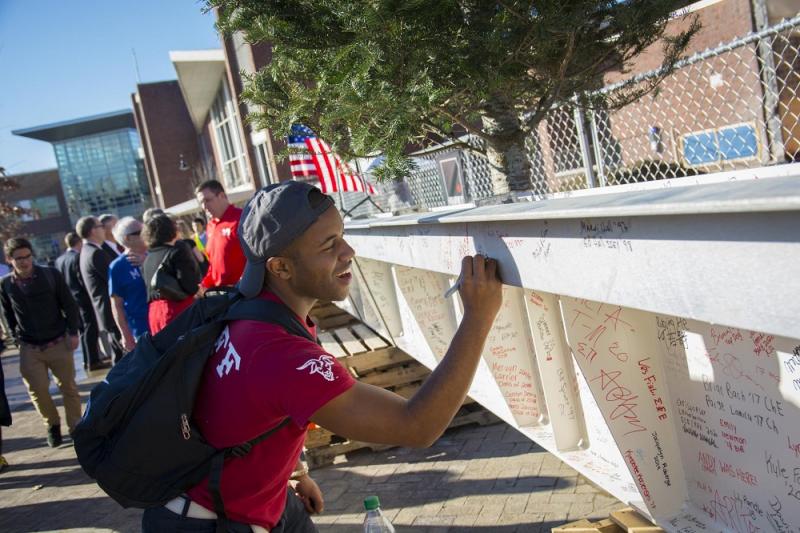 A student signs the beam.

Before the ceremony, all members of the WPI community were invited to stop by the Quad and sign the ceremonial beam—hundreds turned out over the course of the afternoon to leave their mark and be a part of WPI history. Many more students, faculty, staff, and visitors gathered later in the day for the topping-off ceremony, which included remarks from President Laurie Leshin, Worcester Mayor Joe Petty, and WPI Board chair Jack Mollen.

With roots in Scandinavia, the traditional topping-off ceremony consists of workers placing a tree on top of a building’s final beam in order to appease tree-dwelling spirits who may have been displaced in the building’s construction. In accordance with this tradition, a tree and an American flag were secured to the final beam of the Foisie Innovation Studio.

“I just would like to point out that this is our Strategic Plan, coming out of the ground right here. The Foisie Innovation Studio is really a critical component of our strategy going forward. It is a physical home for the WPI Plan in its modern incarnation,” Leshin told the gathering. “This resource will become a hub for our entire campus, and one that really highlights the extraordinary history of WPI through the WPI Plan, as well as positioning us for an innovative future.” 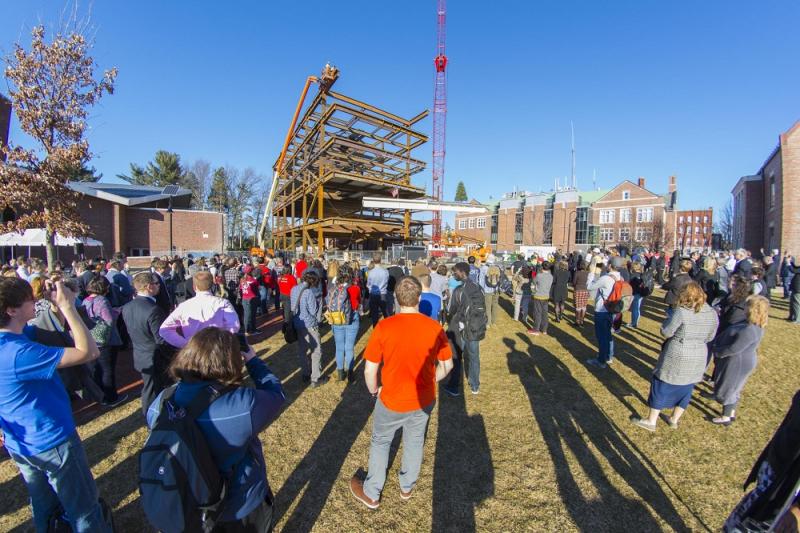 The beam begins its ascent as the WPI community
looks on.

Before the beam began its ascent, Mollen explained the impact of Alumni Gym, which had stood for a century on the space where Foisie will reside, saying that, “This space and the building that was on it really touched so many lives of so many WPI alumni, so it was very hard to think about what we can do next. But as we talked through it, worked through it, talked to the alumni, they wanted to make sure that space was important to the next generation of lives at WPI.”

Mayor Petty also praised WPI for its innovative approach to technological education, saying that he “can only imagine the innovation that’ll soon be taking place in this building.”

Over the past few years, more than $18 million has been raised to help make the Foisie Innovation Studio a reality, including $3 million from the George I. Alden Trust. That $3 million was a product of the Alden Trust Challenge, which challenged WPI alumni to raise $9 million in 18 months, and inspired over 1,300 donors to contribute to the cause.

The Foisie Innovation Studio will house two floors of classrooms, laboratories, and offices, as well as three floors of living space for 140 students. The next phase in the construction process can now begin, and WPI is one step closer to a new area on campus for students to do what they do best—innovate, create, and make a tangible difference in the world.

In Mollen’s words, “We’ll see you all in 18 months when we open the doors.”