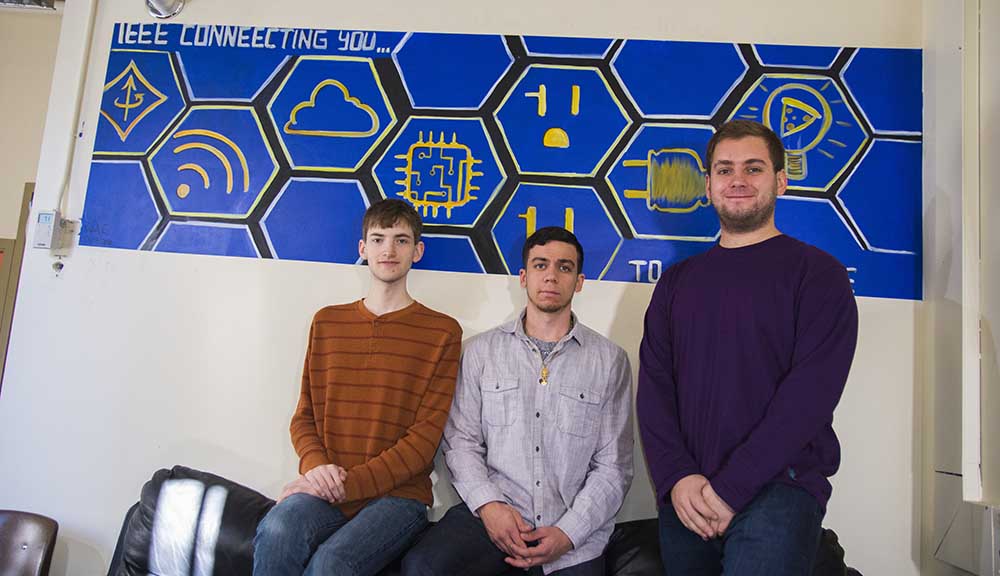 Three members of We Art Good in front of one of the club's artworks.

When someone says they’re part of a mural club, it might be easy to name influences like Banksy, Blu, Lady Pink, or other famous graffiti and mural artists as artists they look up to.

But ask Joshua Shukan, vice president of We Art Good, WPI’s mural club, to name some of his biggest influences?

“As of recently, I’ve been inspired by the style and methods of Bob Ross.”

“Ross is so positive, and his style is so intuitive...through his works, I’ve learned not only how to paint better, but also how to apply some of his styles to other mediums, like chalk,” he says.

Although Shukan and the rest of We Art Good aren’t necessarily interested in art or design as a future career option, they are on a mission to add more splashes of color and creativity to campus. “WPI is such a science- and tech-focused school that we often forget to notice the smaller, more aesthetic parts of life,” he explains.

Each term, various clubs, groups, and departments commission Shukan and his fellow artists to create murals and chalkings to help advertise for upcoming events or to decorate lab space: they’ll provide materials, and the members of We Art Good will take care of the rest. They’ve created work for Women in Electrical & Computer Engineering, Women in Computer Science, Haunted Higgins House, WPI’s Fencing Club, countless chalkings throughout campus, and more.

After spotting some of the artwork done by other club members in 2015, Shukan became inspired to start chalking. He practiced and eventually found his way to a We Art Good meeting, and the rest is history.

Shukan’s favorite memory of his time in the club features something that’s prominent in every college kid’s life: all-nighters. The club was commissioned to create a mural in the IEEE lounge in Atwater Kent, and shortly after meeting up at 8:00 one night, they decided to scrap their original idea and improvise, finishing the project at around three in the morning. “It was a load of fun,” he says, “not only because of how redesigning the mural touched on my creative side, but also because of the good company of the members who were there.”

Whether students are on a mission to become the next Rembrandt or just enjoy doodling in the margins of their notebooks, they’re welcome in We Art Good—they may grab some paint or chalk and email the club for more information on their next meeting in the fall. The WPI community can’t wait to see more happy trees around campus.

This is the tenth of the "WPI's Got What?" series, highlighting the variety of clubs and organizations at WPI. Check out other clubs that have been profiled: