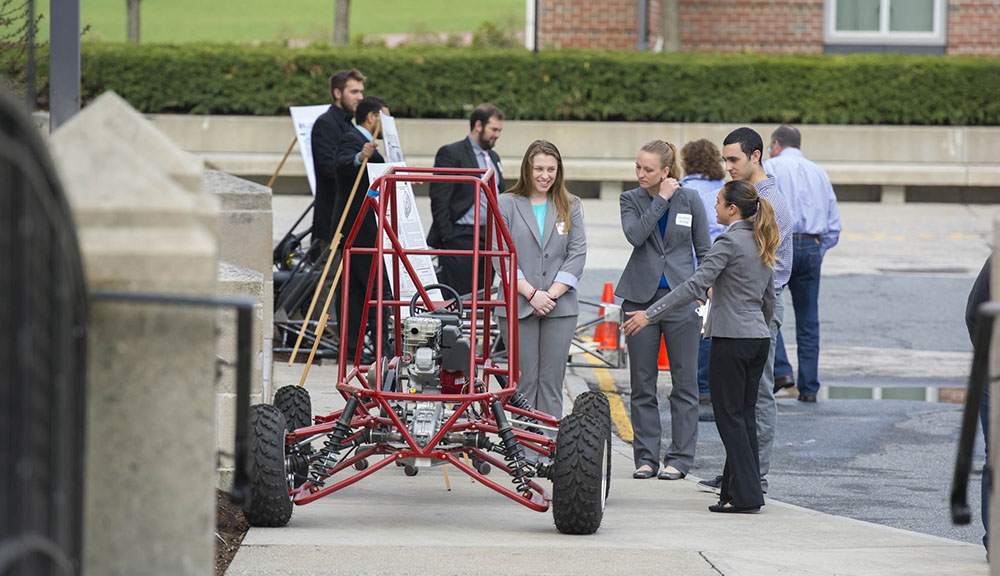 If WPI seniors know one thing at the end of Project Presentation Day, it’s this: they are a lot more capable than they ever realized and their presentations just proved it.

Project Presentation Day is a yearly event in which students give poster presentations and demonstrations of their Major Qualifying Project (MQP) work, one of two project-based graduation requirements, to their advisors, project sponsors, WPI community, friends, and families. These presentations, which this year occurred on April 20, showcase exactly how students put theory into practice and are often eye-opening to guests and presenters alike.

“What I’ll take away from this is knowing what I am capable of,” says Mikayla Bolduc of her project with Briana Rodriguez: “Realistic Organs for Ultrasound Guided Procedures.” “When we got this project, it almost seemed impossible. But WPI put us in good standing and showed us we are able to solve real-world problems.”

Rodriguez agrees. “Because we had an off-campus advisor, we had the industrial aspect, too,” she says. Reporting to one person with results and progress mirrors the professional communications expected in typical work projects.

Over the course of the day, students from all disciplines gave presentations across campus, leaving places like Atwater Kent, Alden Hall, the Odeum, Salisbury Labs, Higgins Labs, Washburn Shops, Fuller Labs, Kaven Hall, Olin Hall, and Higgins House buzzing with activity. Students must prepare a thorough written report, a poster, and an oral presentation; they also need to be ready for a short Q&A session.

Many MQPs are sponsored by external partners or organizations and can lead to implementation at a site. Other projects are published in peer-reviewed journals or presented at conferences for their research or design work, which is expected to be of professional-level quality. The work is rigorous as students grapple not only with completing the basic tasks, but also with considering how their final outcome will be used in the real world and its potential impact on society.

Nathaniel Jefferson hopes his project, “Swarm Robotics,” with team members Peter Raspe and Nam Tran Ngoc, will eventually help farmers keep an eye on their crops while saving time and money. The project’s robotic devices can be used to sense field conditions over a wide swath of land and can “talk” to each other so farmers can see real-time conditions. Jefferson said the project, which had elements of robotics engineering, electrical engineering, and computer science, helped him see the big picture. “The specifics of this project carried a sense of making everything work together,” he says. “Unity with all systems was the overarching theme. The project turned out a lot different than what I envisioned in the beginning.”

The bar is set high, and the students often aim higher. The “Dexter: A Smart Prosthetic Device for Transradial Amputees” team presented a prosthetic robotic arm that is already helping other researchers. With an embedded camera and delicate finger and thumb sensors, the prosthetic both “sees” and “feels” objects for better accuracy and more refined grip strength. It’s even designed with wireless communication capabilities.

Dexter team member Gabrielle O’Dell says the team pushed hard because they were all passionate about the project and wanted to see it live on after their work was complete. “We wanted to do more than we had to do,” she says. “We wanted to learn for our future and wanted to push ourselves.” Graduate students at WPI are currently using Dexter for their own research projects, giving them access to a cutting-edge, low-cost piece of equipment.

Yesugey Batu Sipka says the team focused on the long-term goal of helping others and finishing a memorable project. “We wanted to make a mark,” he says. And while the product is not being used as a prosthetic at the moment, team member Sienna Mayer has no doubt about its impact. “Even if this is just used for research alone, I really, truly think what we have done here will make a difference,” she says.

“MQP is part of the soul of WPI,” he says. “Our theory and practice motto is implemented at a grand level by this process. I don’t think students or faculty from other institutions can truly appreciate what the MQP program at WPI entails. It stimulates personal growth from junior-level students to real-life engineers while also teaching valuable lessons in team organization, reporting, task delegation, following design/engineering timelines, and finding alternative solutions when the initial approach doesn’t pan out.”

Like any project, MQPs aren’t without a few surprises.

As part of a five-student team, Ari Goodman worked on the “Control of a Bipedal Robot” and realized how working on such an intricate system is entirely unpredictable. The team’s robot, the Anthropomorphic Robotic Movement System (ARMS), actually began as another MQP project four years ago that didn’t reach its goal of making the robot walk. The ARMS team picked the project with similar goals. While starting with an existing base might sound like a time-saving move, it brought a surprising amount of work for the team.

Starting with the “bones” and the motors, the team set out to replace elements including cabling, electrical work, foot sensors, and foot pads to gain control of the robot. While the robot did not walk on the ground, the team was able to make it stand and walk in the air. Discovering an unrealized flaw in the design, Logan Tutt says the team learned how analyzing a project is so essential. “We underestimated some of the challenges,” he says. But the team agreed that becoming fluent in reverse engineering methods, in the engineering and electrical work, and in figuring out what had to be done and in what order was excellent preparation for the future.

From an advisor’s perspective, the projects vary, but the process is what gives the students a foundation. “While the goals of each project are different, the process is identical, starting from a need statement, following the design process, to reach a working prototype tested in realistic conditions,” says Onal. “It is a very active process, and after the scope is decided with the advisors, the success of the project rests on the team. This lets students rise up to the challenges and take ownership of their projects.”

Bolduc, whose team was able to create a realistic simulated organ, says the nature of the MQP and the Project Presentation Day experience made her WPI education clear. “I see the value of the MQP itself, but also in the value of every class I took at WPI,” she says. “When you’re a freshman you don’t always see how it will relate. This shows how it does.”